The Legend of the Village Bobby 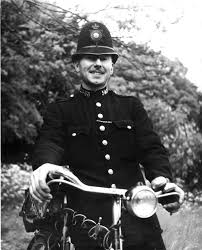 A sentimental story with a sting in the tale

The Constable pushed his bicycle down the path towards the little wooden gate. He brushed past the blossoming lavender, buds catching on his freshly pressed trousers. The spring morning saw mists clearing across fields of swaying crops as birds soared from the ancient trees at the bottom of the meadow.

The Constable leaned his bicycle against the dry stone wall which separated the police house from the Post Office next door. He tightened the chin strap under his helmet, and ran his fingers across his sideburns. His fingers ran down his tunic, checking each shiny button one by one. A last glance up and down the street and he set off.

An approaching tractor lifted dust from the roadway, the low roar of it's engine joining the sound of the cattle being moved between fields beyond the village boundary. The farmhand gazed at the cycling Constable who waved good morning. The farmhand drove on, offering his middle finger in reply.

The Constable remained in a different era. His was a world of calm, of tradition, dubious morality and serial inbreeding. The country was a world apart, and his job was to protect the values of his forefathers. Crime was the blight of the big city.

The morning was spent directing traffic. It was holiday time, and the Constable was charged with making sure nobody that looked foreign be allowed to stop in the village. This took most of the morning, and became tiring, but the Constable was cheered by the support of the cross eyed youths at the bus stop who yelled abuse at everyone he instructed to keep moving or fear arrest.

Before lunch, the Constable helped old Mrs Morgan across the road to collect her groceries. He nipped in for a lovely cup of tea, and ate her food for lunch. They shared a nip of sherry as he passed her the pen to sign the will showing the Constable as the sole beneficiary. 'Good day Constable!' said Mrs Morgan as she closed the door behind him. 'Silly bitch' muttered the Constable under his breath before whistling a lively tune and mounting his bicycle for a a quick spin before going to the village school.

Rosy cheeked youngsters in baggy shorts listened in growing horror as the Constable told tales of child abduction and rape from his time in the CID before he was busted back to uniform for taking cocaine in the office. As the last child was led away sobbing, the Constable smiled in satisfaction, and sauntered off to collect his kick back from the headmaster who ran a brothel from the flat above the newsagent.

The afternoon and early evening saw the Constable's bicycle propped against the wall of the village pub. Inside, warmed by the log fire, the Constable drank his fill of local ale and fine whiskey. He shared tales with the old men at the bar until he became angry and abusive and one by one they all sidled off home.

As the evening drew to a close, the Constable left the empty pub to return home, the sounds of owls hunting the only noise to break the perfect silence. Stars filled the sky, as moonlight showed the way. The Constable sighed with delight, stripping off to slip into his tight leather pants and thigh high boots. As the music took him, he danced the night away to the slavering delight of the slack jawed farmers who watched through the scullery window.

Email ThisBlogThis!Share to TwitterShare to FacebookShare to Pinterest
Labels: Comedy

I have just downloaded iStripper, so I can watch the sexiest virtual strippers on my desktop.